It’s a perfect day as our boat stops in Canada’s British Columbia’s spectacular Knight Inlet to watch for grizzly bears.

Our guides from TideRip Grizzly Adventures are experts when it comes to everything you have ever wanted to know about bears and they tell us to expect the unexpected.

Right on cue, a big grizzly heads to the beach just in front of us to hunt for food and everyone is mesmerised.

Looking a little lean after coming out of hibernation, the bear has only one thing on his mind – food and starts turning over rocks.

He pays us scant attention and carries on with his scavenging as cameras click madly.

Knight Inlet is set in the most spectacular scenery; majestic snow-capped mountains give way to steep cliffs covered in green cedar trees, a strip of rocky beach and then bright blue glacier-fed water.

But it is hard to take your eyes off the grizzlies as they lope around the beach.

You can’t help feeling you would like to give them a cuddle but we are constantly reminded they are wild animals and we keep our distance.

Our guides are both armed with bear pepper spray, just in case they become a little too inquisitive.

We do not leave the boat and eat our lunch in the middle of the estuary so the bears do not associate food with humans.

Another bear appears not far away and our guide, Howard tells us it could be interesting as bears like their own space.

But today, they are too hungry to worry and continue turning over boulders like they are pebbles, hunting for crabs, barnacles and mussels.

Knight Inlet is one of the largest fjords on the British Columbia coastline and Glendale Cove is renowned for its large concentration of grizzly bears.

In peak season you can see as many as 50 bears hunting for salmon and feeding them to their cubs in the rivers and streams.

Many people fly by seaplane into the exclusive floating Knight Inlet Lodge and stay several days.

An alternative is to drive to the quaint town of Telegraph Cove on Vancouver Island, which has a permanent population of 20, and from there book a full day tour with Tide Rip and end up at the same place.

It takes about 90 minutes to get to Knight Inlet by boat from Telegraph Cove.

On the way, a pod of Pacific white-sided dolphins surf the wake which is a spectacular sight.

We also see black bears on the low tide beaches, bald eagles and a river otter.

There is a gentleman’s agreement that bear watching is done at various times by the two tour companies and as we arrive, the others move on, so we have prime position.

After a while we move further up the cove and see five bears all enjoying the spring sedge grasses in the river lowlands.

We share the boat with four Germans who head to Telegraph Cove every year to see the bears.

“You never get tired of watching them, where else in the world could you witness this,” one says to us.

As the snow melts, both black and grizzly bears emerge from their hibernation dens on the mountains slopes.

Early May to mid June is the mating season when you see lots of interesting interaction.

The big bears chase the not-too-interested females until they finally surrender.

Early July is the season of newborn cubs scrambling along beside their mothers.

Howard says the female bear is very protective of her cubs and hides them from big boars until the berries ripen in late June, then she slowly leads them down into the excellent grizzly habitat of the river estuary.

In July the sighting rate drops to 70 per cent as the berries are ripe and the bears feast on huckleberries, salmon berries and elder berries in the bush, which is hard to see from the boat.

But today it is perfect viewing and all up we spy on about 10 bears.

From August 15 to 24 the salmon start arriving and the bears chase the fish around in the low tide pools at the river mouth and have lots of fun. Viewing is then done from special stands.

Home for the night is Telegraph Cove, tucked away on the eastern coast of northern Vancouver Island in one of the virtually untouched areas of North America.

The tiny sawmill and cannery community has a rich and colourful history and is built and connected by stilts to the mainland.

Today Telegraph Cove is inundated with tourists in summer who come to fish and see grizzlies who are both intriguing and entertaining. 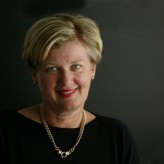